Bodgie in the Library 2

My first bodgie sighting was at St Peters College as a third former in the first term of 1955. I was in the long and jostling queue in the quad for the morning tea cream buns. The only lad not in the queue was standing with legs apart tipping a jar of Brylcreem over his head, using a comb to shape it into a duck’s arse at the back. His lip curled when he saw me looking.

‘Who’s that?’ I asked Jimmy Lagan.

‘Eh?’ I said, puzzled by his thick Scottish accent. ‘Did you say that was a budgie?’

I didn’t then, but I did notice he had somehow acquired a dozen cream buns when the limit was six. Despite his sneer, he scoffed the lot in double quick time and got back to his hair-styling.

Bodgies I soon learned were brash and colourful in glitter jackets and neon pink socks in contrast to our grey-uniformed, short back and sides, conventional and so square post-war world. To the bodgies we were peasants. I didn’t know then how different bodgies were from the leather-jacketed bikies, though both were rebels without a cause – 1955 was the year of that James Dean movie, and rock music was just coming in.

When I got into Queen Street, the most exciting thing after a John Wayne cowboy movie was the bikies sitting astride their big motorbikes outside Curry’s milk bar, daring you to look at them or their widgie girlfriends with cropped platinum hair and matador pants. The legal drinking age was 21, they were too young to frequent pubs. If I had seen Marlon Brando in The Wild One I would have known who their role model was. That movie like just about anything not wholesome and well-behaved was banned. Their bikes made an incredible racket as they revved, taking off with hob-nailed  boots sparking on the asphalt.

It was five years later in Wellington before I got my first and only bike, a Matchless 350cc. Every time I heard Leader of the Pack I thought of those Curry boys. It passed me by that in 1955 two bodgies were hanged for murders in Queen Street, one the subject of a new Fiona Kidman book. But I never forgot the rebel look of those bikies and their ‘pillion pets’.

It took all this time to emerge as On a Bodgie Bike, which does among other things explain the bodgie/bikie divide. These days bodgies would be into hiphop or gansta rap, extreme sports, Survivor Vanuatu or bunjy jumping, competing in digital gaming, starting a digital company or inventing an app. Options for thrillseekers were limited in those days. What was in my mind was that they were the first rebels against a very controlled society, which most youth like me chafed against. I hated that absurd rifle drill at St Peters College, square bashing until some of the 13-year-olds fainted in their serge uniforms and heavy 303 rifles, preparing us for cannon fodder in the next war.

The bodgies and widgies were the subjects of much abuse and denunciation. This book attempts to offer their perspective — every second chapter, to be precise. It is an attempt to portray bodgies from the inside, not as an observer. ‘I defy you, stars!’ is a defiant line from Romeo and Juliet that excites rebellious bikie Matt almost as much as does the girl playing Juliet in a school production he is nudged into attending. Matt and Mira become an item and one around which all the action swirls. They are not Bonnie and Clyde, but they are resourceful, and Mira has a certain sass and stroppiness not unlike the Girl with the Dragon Tattoo.

An early reviewer of the book found it ‘distasteful’. It undoubtedly is. The bodgies and bikies were often distasteful. Their language was not polite, and their behaviour was what might be called ‘loose’, the widgies largely copping the blame from the worthy male establishment with their hostile attitude to women not too far removed from that seen in conservative societies today. Whilst I reflect their distasteful behaviour, I suggest they were not as bad as their overseers, those Christian Brothers in my case who strapped us viciously on a daily teaching basis and subjected the most vulnerable, like ‘Nellie’ in my own classroom case, to unrelenting sarcasm and assault. Everywhere in the Western world the kids were starting to assert themselves, to fight back. This is perhaps an extreme example.

It also involves a third outing for Dan Delaney, who as a policeman in 1935 Auckland investigated foreign agents trying to steal an Auckland scientist’s invention. Much of this was based on fact, less so with Dan’s second outing working in counterintelligence to thwart an attempt in 1945 to assassinate Prime Minister Peter Fraser, which comes at a tragic cost to Dan’s personal life. Dan in this outing is living with his father in Ponsonby when his nephew in Glen Eden is involved in the burglary of a monstrance that results in the death of a Croatian migrant. The nephew is charged with murder and Dan is drawn into the fray, which escalates into an international incident.

Once again Dan works with a real-life figure, ex-Commissioner of Police James Cummings, famous for a first Commonwealth conviction of a murderer based on fingerprint evidence. The victim was the post master at Ponsonby, where my father began his post office career. Corruption within the police has led to Cummings advising on the set-up of a separate security intelligence service. At the time the police force was going through a bad time, its commissioner removed from office for misusing his powers and some senior police investigated for corruption. In researching the book I interviewed one of the detectives involved in investigating police corruption in Auckland. He also spoke of police brutality and the Catholic/Protestant split in the police. I learned a lot about Cummings from other police contacts and he has a central role to play in this novel.

Cummings gives Dan vital assistance in tracking down the monstrance, a religious icon at the centre of Croatian resistance to Yugoslav communist rule. In my novel the pursuit of the stolen monstrance accelerates from Mater Hospital to Waikumete Cemetery to a West Auckland villa to a Piha bush community to a Grey Lynn dump to an Avondale Presbytery, with motorbikes, police cars and jalopies, even a Caterpillar tractor in the mix. Those with a stake in the outcome include Croatian nationalists, an unscrupulous former Nazi turned Soviet spy, a Catholic priest fresh from the Vatican, both corrupt and kosher police, a gang of feral bodgies and other interested parties. They do not treat each other well, but their most unpleasant behaviour is visited upon Delaney and his bikie nephew.

Here is a taster of the action from page 14, with Matt taking off with the stolen monstrance on his bodgie mate’s motorbike and heading for Waikumete Cemetery and a caretaker armed and dangerous.

Image of author reading the excerpt to Titirangi Library guests. 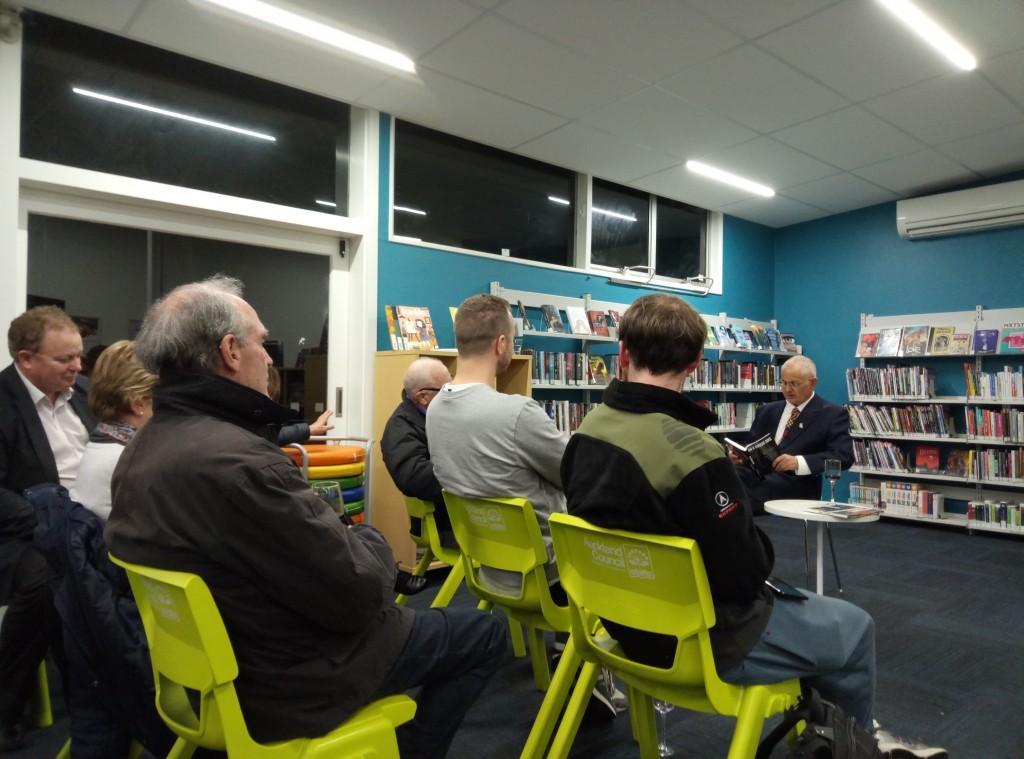