Jonah inspired Kiwi-speak, such as the verb to be lomu-ed and Tongan steroids.

Jonah Lomu was for many Kiwis much more than the first global rugby superstar. The very big Tongan All Blacks winger lifted his team and his country to a new level of branding, creating cultural connections. We delighted in Jonah. The attached December 3 1999 Truth newspaper cover story on my Christmas stocking filler David McGill’s Rude New Zealand Limericks is in the right perspective. Jonah is in dominant stride beneath the headline ‘Poetry in Motion’, me and the other Kiwi icons I wrote silly ditties about quite properly reduced to sidebars to the great man.

Through the nineties I compiled a number of Kiwi slang collections, in which I celebrated the rare occurrence of Jonah’s surname becoming a verb, to be lomu-ed, meaning to be barged aside or walked over. The reference was to what Jonah did to opponents at the 1995 Rugby World Cup, most direly to English fullback Mike Catt and the wretched English winger Tony Underwood who was obliged to mark Jonah. A banner at the semi-final win over England read: ‘God forget the Queen, Save instead Underwood from Lomu’.

The British media drove the globalisation of the 20-year-old. The London Evening Standard cartooned him as six foot, five inch, 19 stone, 103 miles per hour. The Daily Mail poll of female staff indicated he melted seven out of 10 hearts. A Leeds university physics formula reported that if English stand-off Rob Andrew tackled Jonah, the winger’s ‘momentum conservation’ would drive Andrew backwards at 2.05 metres per second. In The Times Nigella Lawson wrote ‘this moving statue of a man is a beautiful pagan god’. In the Daily Telegraph John Mason wrote he was ‘a runaway potting shed in boots’.

There were reports Jonah was the first rugby millionaire and was offered £3 million to turn professional boxer. His exuberant Welsh manager Phil Kingsley-Jones said if he wanted Jonah could be the first black James Bond.

An Australian television newscaster suggested Jonah danced over the opposition with ‘the Maori side-step’. Veteran US newscaster Dan Rather said this was not a tale of Jonah and the whale, this was Jonah as the whale.

Kiwi cricketer Jeremy Coney described a ‘ten-pack Lomu powerburger’  and Tom Scott had a cartoon of a South African saying the Springbok winger marking Jonah lacked ‘an elephant gun that would stop a charging rhino’. Former All Black winger Stu Wilson said Jonah is ‘like a stick of dynamite with skin’.

He was a shooting star. I saw him play at Mt Smart stadium in Auckland in the first half of the nineties, when he was a Number Eight; he carted four or six players with him to the try line. In the second half of the nineties I walked daily past his Maupuia pink mansion, worth at the time $6 million. We didn’t know then he was paying for his giant prowess with failing kidneys. He fought his illness through two decades without complaint, always on the world stage working with children’s charities and meeting and greeting his millions of fans. Jonah, RIP. 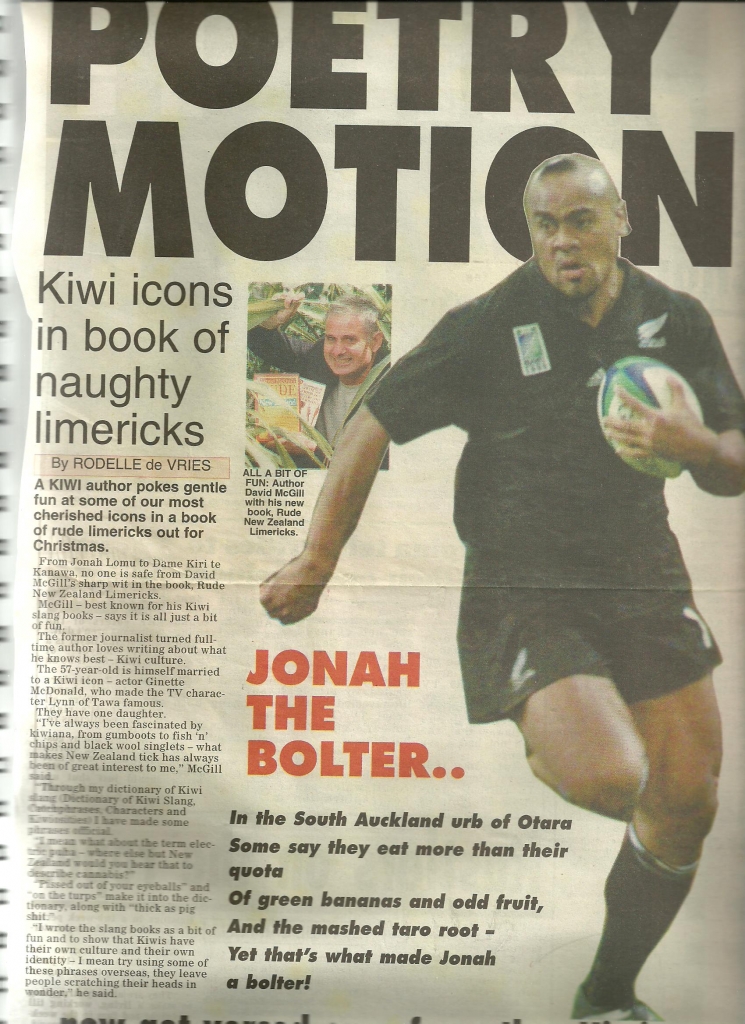