KIWI FAMILY CAUGHT UP IN TERRORIST PLOT AGAINST ISRAEL

Virtual launch today 6 May 2020 for print and e-book versions of my new thriller The Manger, the Mikdash and the Mosque

NZ Fiction reviewer Alyson Baker’s blog review published in Crime Watch: ‘Dan Delaney, now ‘damn near 60’, travels with his devout wife, Jas, and two daughters to ‘… this busy city on a hill in the middle of nowhere, the centre of everywhere’ – Jerusalem.  There he encounters kidnappings, bomb threats, old betês noires, and his own worst nightmares.

In some ways Dan has come a long way since we met him on Somes Island in 1935: he has been a POW in WW2, had one surprising outcome to a marriage, and has had many derring-do adventures and saved many lives, some of them of high-profile people.  But in other ways he is the same Dan, always slightly on the outside of things, always trying to do the right thing.  He is now married to Jas, a former police officer, and he and his son are vintners in Oratia.  His younger daughter Maria is a renegade and has reluctantly joined the family pilgrimage, having been in what her parents saw as a dangerous relationship with a teacher.  Dan’s other daughter, Ali, is devout and keen on biblical archaeology, and she and her mother are ‘in religious anticipation mode’, in fact Jas ends up succumbing to ‘Jerusalem Syndrome’ and loses it a bit.

From the moment their plane lands, Dan and his family are in the thick of it – coming to the attention of Israeli soldiers, partly due to Maria calling one of them a Nazi when they object to her taking his picture.  They stay in a hotel run by a Muslim man, Omar and his son, Mohammed, a hotel which is oddly bereft of other clients, and they soon make the acquaintance of a Catholic priest who is a bit of a drunk.  Dan is surrounded by a cacophony of clashing religious and cultural views in this ‘religious shark tank of a city’, and he ends up suspicious of everyone.  It is the mid-1970s and the strongly-voiced views are shocking: Father Quinn of Muslims: “Scratch the surface and they are still ruddy camel jockeys”, Jas of Maria’s revolutionary views: “extreme left-wing nonsense about us being the colonial oppressors of Maori, Abos, Pacific Islanders …”

Although Dan is amazed at how much he remembers of his religious upbringing, he finds Jas and Ali’s religious fervour bewildering, he has more sympathy for Maria’s enthusiasms, joining her in making swiping remarks that annoy Jas.  But when bomb threats are thwarted, Maria disappears, then more of his family are kidnapped, and a plot to destabilise (literally) the region is uncovered, the family unites to protect each other and the city.  The confusion and energy of Jerusalem and the other holy places is well captured, the markets, the Abrahamic religions-resonating countryside and most of all the many many places of worship.  Even with the hostilities and history the city has seen, there is still freedom for each of the faiths to worship.  To worship and to contest and to lay claim.

The characters are all complex.  The soldiers perhaps having the clearest motive: protecting their land and people, and sometimes stretching the rules to do so.  The mercenary motives of the conspirators are also straight forward: they are for hire by any of the many factions.  But the Second World War and the various more recent Middle Eastern conflicts are still raw memories, and they have led to more complicated motives and allegiances.  Dan is still struggling with the trauma of being a POW in a concentration camp during the war, he is extremely sympathetic to the Jewish population, but also aware of the plight of the Palestinians.  Father Quinn in one of his more sympathetic moments talks of ‘Arabs reduced to being serfs in their own city.’  Quinn may be a drunk priest, but he is living with the burden of ‘one hundred percent casualties’ among the Australian airmen he ministered to during the war. Also, many characters are acting out of fear of their loved ones being hurt, it is no surprise that Dan notices he had yet to see an Israeli smile, but that the Arabs were always smiling, if sometimes a bit hollowly.

Much of the book is based on the author’s trip to Israel in the mid-1970s and his descriptions are personal ones, the reader even gets left-over memories in an Appendix. He uses Ali’s expertise to explain much of the history and intricacies of the religious building complexes, and most importantly how many of the places of worship are built over fragile tunnels – a terrorist’s dream and claustrophobic Dan’s nightmare.  The time, 1970s but with Israel still quaintly in the 1960s, is indicated by movie references (some more subtly inserted than others), dress styles, cigarette-smoke filled meetings, and a Kibbutz full of idealism from all corners of the globe.  Dan is constantly comparing Israel and New Zealand, at one point deciding ‘a kibbutz was like a holiday camp on Waiheke.’  And a parallel is drawn between Peter Fraser and the Labour Prime Minister of Israel, Yitzhak Rabin, who makes a sympathetic appearance in the novel.

There is one odd glitch in the novel, where we hear of a murder before we have been introduced to the character and before he has been killed, but for the most part the helter-skelter pace keeps the reader reading, and guessing.  Dan progresses from a bit unsure, through traumatised, onto tearful and fearful and finally to a sort of awareness, realising at one point it was ‘… a monumental mistake coming here to this unholy land’ and that military officials and his enemies know more about him than his wife does.  But for poor Dan there is a satisfying resolution with some good news at the end, leaving him looking forward to getting back to his vines, but also looking forward to returning to ‘The revealed centre of the world for so many religions.’  An interesting and at times gripping read.’

NB The glitch has been fixed in print version and was never in e-version. 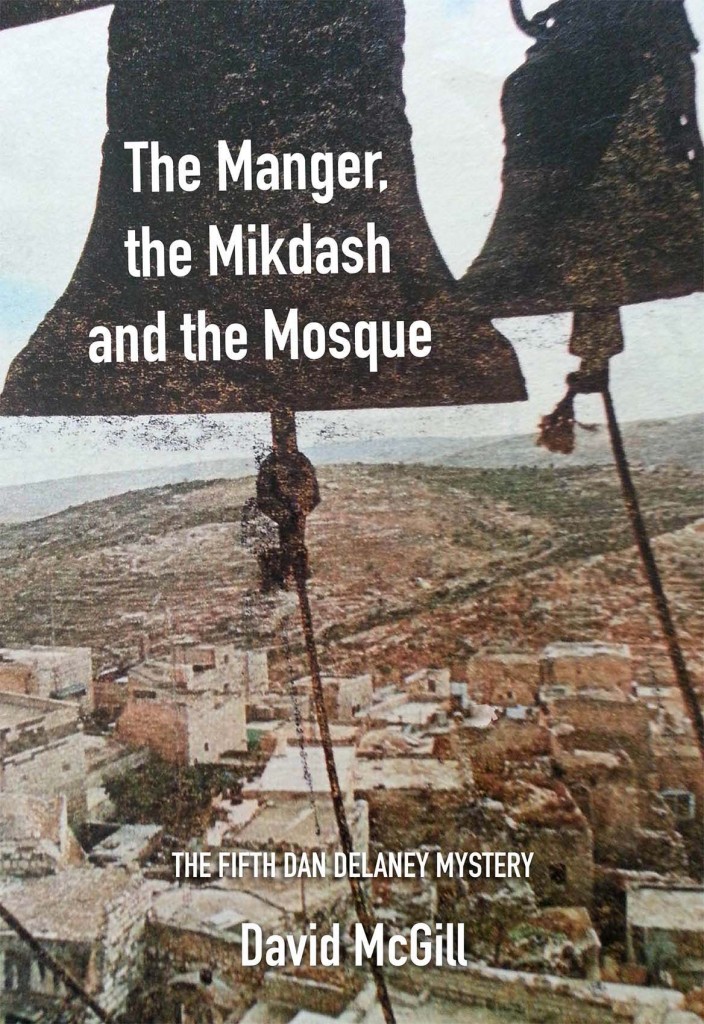