Murder in the Library

Murder in the Library is proliferating like poisonous fungi in the woods around Midsomer Norton. Last year I was booked for the Lower Hutt Murder in the Library gig, but took ill. This year I am booked for Paraparaumu Murder in the Library from 6.30pm May 29. I was aware of a few other such library occasions last year. This year they are sprouting in Nelson, Greytown, Otahuhu, Napier, Christchurch, Tauranga, Dunedin, Queenstown, Waitakere, and Lower Hutt has two this month. Three or four local crime writers talk to an audience about their craft, with an adjudicator keeping them on the straight and narrow, or maybe I should say, the crooked and harrowed – a harrow being an agricultural implement with many viciously sharp tines that turn the earth and impaled Kirk Douglas in The List of Adrian Messenger.

Craig Sisterson organises the whole shebang from his home outside London, whence emerge his astonishingly prolific crime reviews. I am sure he has added more than his fair share to promoting his claim that crime is the world’s most popular form of storytelling. I would add that it also has to be the most popular form of storytelling on TV. I pass on the US preference for the FBI tracking several times a week yet another serial killer, whom the pretty agent and her frowning male mentor then rub out the American way in a hail of bullets. I watch the Brits, having been crime reared on the BBC’s Maigret and ITV’s Van der Valk. I moved with the times to Morse and Frost, Ngaio Marsh’s Alleyn, P D James’ Adam Dalgleish, Reginald Hill’s Dalziel and Pascoe, Taggart and Hamish, the prolific Midsomer Murders, Wallander, the New Tricks team, Dangerous Davies, the many incarnations of Agatha’s Miss Marple and Poirot. In the last few years the Brits have reached a new level of intensity with crime series such as Broadchurch, Happy Valley and the breathtaking The Missing.

I got a curly question from the interviewer on local radio about why I wanted to write fiction in my current crime story The Plot to Kill Peter Fraser. Good question, except the facts have been written about extensively, without offering much about Peter Fraser the person. A National Radio request for the book did not lead to an interview, I suspect because the expectation was for some new factual twist on our great World War Two Labour Prime Minister. Fiction about Fraser was not wanted. Okay for De Gaulle in The Day of the Jackal, but that is overseas, not for local versions, thank you. We occasionally dip a TV toe in the crime genre, like Mortimer’s Patch, Duncan and now The Brokenwood Mysteries, one a decade, maybe, and then replaced by another cheap overseas reality show or panel game.

My feeling is that for once the media are not up with the local play, they want the facts, not the rampant fiction and in my case, faction, surrounding public figures. The media flock sycophantically to interview Ian Rankin and Lee Child on their sponsored book tours down under, but there is no great media appetite for local writers, crime or mainstream literary. Take Greg McGee, great in both crime and literary, or Paul Thomas, but neither gets the attention of the latest chef or song thrush. Food and gardening and travel and fashion dominate the magazines produced by the declining newspapers, while radio has plenty of coverage of musicians and the rant du jour. I suggest the media are missing the bus, to use a phrase beloved of my mother, who devoured every new hot-off-the-press Ngaio Marsh, Agatha Christie and John Creasey. No question I got my taste for crime reading at her knee, though I would add the sometimes salacious The Saint was also an adolescent attraction.

My career diverted into journalism and writing books of Kiwi social history, but I am increasingly writing full-on crime fiction, half a dozen in the last two decades, another half-dozen novels with crime in the mix. Writing fiction is more fun. In the last few years it is almost all fiction, just like my library borrowings. I have just devoured two Martin Walkers and I would give three Michelin stars to his crime and food tales of Bruno Courrèges, a French cop as clever as Maigret, as charming as Van der Valk, his food as mouth-watering as anything cooked up by Jamie Oliver. Indeed his cookbook written with his wife and allegedly by Bruno has won the top French cookbook prize. Maybe I should add a few dinkum local recipes into my Kiwi crime 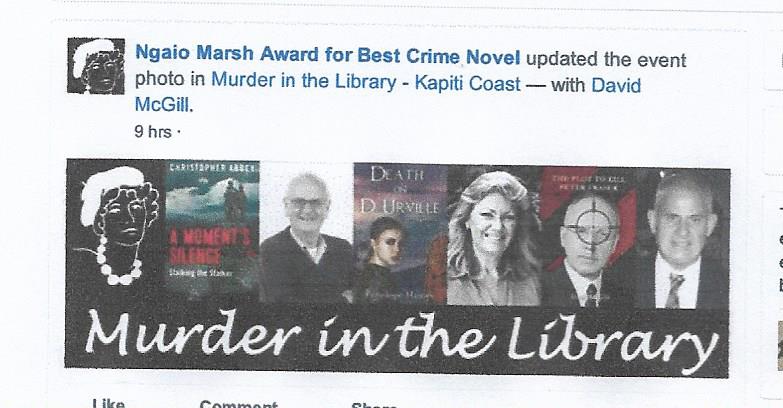