Past Books into Peter

The Plot to Kill Peter Fraser is my 54th book and it owes a research debt to many of my previous books, of which almost one third are about Wellington. Most books evolved out of previous books, but none have drawn so extensively on my Wellington writings.

My first book was in 1961 and called Miscellany, being poems and prose by myself and other students of Wellington Teachers’ College. I was 18 and not afraid to tread where angels fear to. I published it myself without funding, sold it on the streets of Wellington and recovered my outlay of £30, all to pay John Milne Printer of Cuba Street. I had achieved the first objective of any publisher, covering my costs.

I am still not sure why people bought the book, maybe because they felt sorry for me standing on a corner of Cuba and Manners Streets opposite the Sallies’ with War Cry and the communist Vern peddling his vision of a better society. I was just peddling our noodle doodles. I guess I had a cheek, but given the previous year my first foray into book pages was sandwiched between James K Baxter and David Mitchell was cause for head-swelling. Alack and alas, nothing developed from that poetically enthralling start. All has been Kiwi social history from me, some fiction, or faction, if you like, real people and events in a story form.

First off several decades of journalism, what Malcolm Muggeridge called Chronicles of Wasted Time. He was a disenchanted Englishman, I was of Scottish heritage, practising the waste not, want not mantra I learned at my father’s stern knee. So my articles went into books, starting with the newspaper vignettes of old Wellington buildings called Cityscapes, 1977. The queue for signing stretched out of the old Whitcoulls all the way down Lambton Quay and the manager said we outsigned the previous champ, Robert David Muldoon. The ‘we’ involved the illustrator Grant Tilly, so you can well point out the punters were after Grant’s moniker.

Even so, when we did The Compleat Cityscapes a few years ago, one of those who told me today he had the book open at home was my companion in the attached image, the live one, Grant Robertson, MP for Wellington Central (NB Slightly different from previous attachment on Facebook). There are 244 entries and at my age I forget all of them, but recently I stumbled when looking for something else upon the house where our dead companion Peter Fraser founded the Labour Party in 1916 on The Terrace.

Those articles were very useful for recreating 1945 Wellington of The Plot to Kill Peter Fraser. Like the Italian fishing community of Island Bay, the upmarket yachties of the eastern bays, the Bohemian black market brothel world of Oriental Bay. My book Wellington A Capital Century was good for the Marines here, POW New Zealanders as Prisoners of War for the returning POWs, Island of Secrets for the Nazis and Jews being released from Somes Island.

Landscapes was good for the Government Buildings Grant and I appear in front of, Stacey for the underworld of Wellington, one of those at its launch Bill Crowe, bandleader and proprietor of the Gentleman’s Retreat on Mt Vic. I visited with Harry Seresin and Alice Fraser, good friends. Not for his professional ladies, but to chat to Bill and have a spa. ‘Don’t look,’ Alice said as she slipped under the bubbles.

Alice talked a lot about her grandfather Peter Fraser, who loved poetry and drama and encouraged her splendid career here and in Britain. Indeed I once stayed with her in Pitlochry, north of Glasgow. She as a 10-year-old has a pivotal part to play in my novel. Call it The Day of the Jackal scenario. It is available from Kindle or mebooks.co.nz as an e-book, from me as a print book for $25 including postage, or from Unity Books where we are launching it on Thursday, me and Grant, who knows a lot about Fraser. Come along, drinks and snacks, no pressure to buy. So long as I cover my costs, I’m sweet. 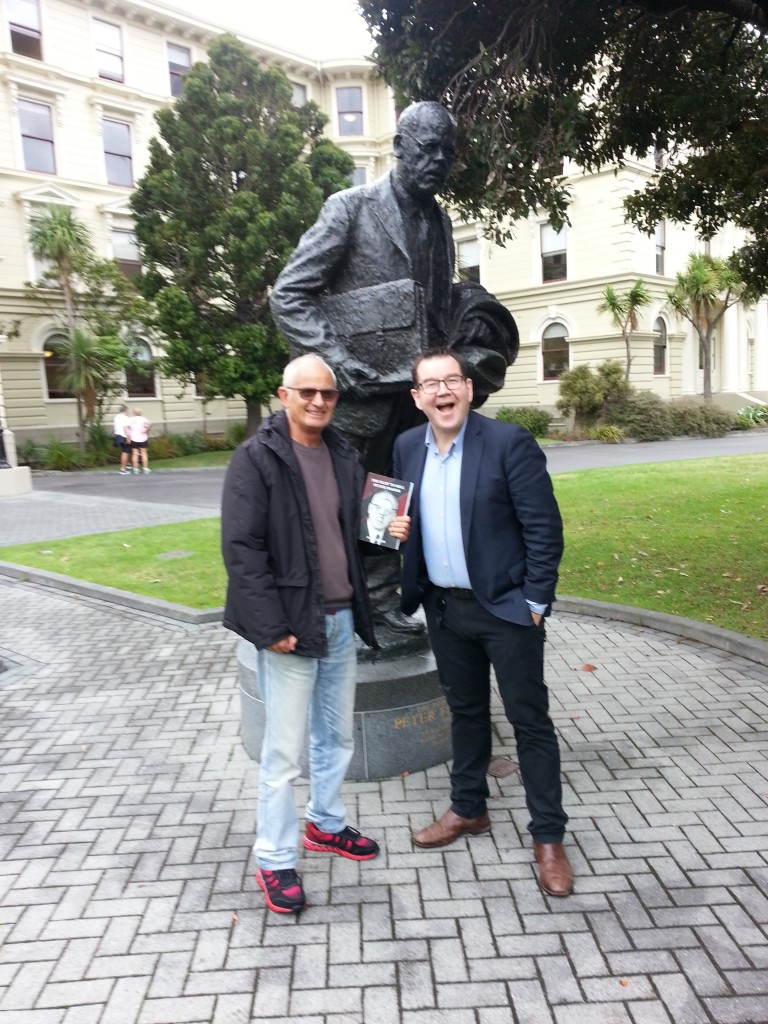