Rotorua’s Taradome is centre stage in my first independent publication dated 1996 and called Whakaari (White Island; advice from publishers and marketers, Do not use a Maori title). It is an eco-thriller set early in the new millennium in our volcano lands. Maori volcano myth and high-tech Pakeha science merge in a terrorist threat to reprise the Tarawera hydrothermal explosion of 1886. In this excerpt narrator Neil Munro visits the Taradome:

I walked around the back of the elegant old Tudor Towers Bathhouse museum. Wiremu Waka’s legacy rose like some alien mushroom moon, a glistening giant silver hexagon, bill-boarded as ‘The World’s only Taradome: THE END OF THE PINK AND WHITE TERRACES MAGIC LIGHT AND SOUND SHOW’.

As I got closer I could see the webbing of black mesh surrounding and tethering the huge plastic bubble to black pylons. I walked slowly round it, just as astonished at its bulk as the exclaiming tourists. It was like some gigantic soccer sculpture that encompassed an entire football field.

I somewhat nervously donned the holomet and entered the twilight tunnel and stepped onto the moving floor. There were yelps of anxiety as we moved into darkness, soft, moaning instruments, bird calls, dense forest emerging. There were giggles and calls to be quiet and oohs of approval as we saw the lake, across it the rippling alabaster fans of the White Terraces, layered up through the bush, disappearing in clouds of vapour.

A small canoe appeared, paddled powerfully by a Maori. We followed, past steam and geyser eruptions. We could hear the plopping of boiling mud and the hissing of team.

Around a corner at the water’s edge the smaller, exquisitely coloured steps of the Pink Terraces, ascending in enlarging fans.

We hurtled after the canoe onto a bigger lake. On the far side loomed the black and red mass of the mountain. A black cloud moved stealthily across our vision, unmasking a full chill silver-white moon. A shattering sound made me jump. An intense flash of lighting lit up the lake. Stark against the bush was a shimmering canoe with high carved ends, cloaked figures paddling, at the stern one stood with spear raised. Clearly these were warriors in a war canoe, except their heads were those of dogs.

The moon darkened and enlarged and assumed the dull, burnished appearance of a rusty cannonball. A muted rumble intensified to a roar, mountain, forest and water shook violently, a column of fire ripped out of the mountain, rearing into a sky stitched by lightning, black pillars of smoke bulling out on either side. Enormous explosions shattered our eardrums, rocks and debris hurtled in every direction.

What I could not understand was the sharp stench, not of sulphur, of something artificial. There was a sound like cellophane crackling. I thought they must have added in smell effects to the amazing holographics, but then I realised the malodour was wrong. People were coughing, complaining.

It got worse. The saffron sky peeled back to reveal clear blue. Curling black goo was dripping from exposed girders. People were falling to the moving floor, coughing and choking and crying for help. I tore off the holomet. It was no longer special effects and we were trapped in this inferno of stinging smoke. I sank to the floor, which shuddered to a stop. I didn’t know which way was out. The heat was astonishing.

What one reviewer called ‘a real ripper’ has not dated because it is still in the future, as is its Green Government. I post this with the claim that it is the first published example of what, come the January Rotorua crime fest, will be an eruption of Rotorua Noir. Contact me on my website if you want to get a copy of the book and read how Neil survived. 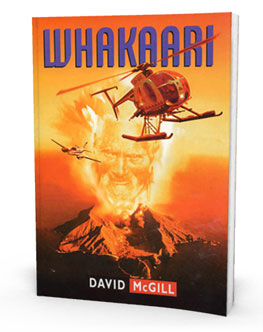