A friend emailed me a few weeks ago that Bill Yocum had died while looking after a Nelson house, aged 72. The house was in good hands. Bill described himself as a mendicant carpenter. I live with Bill’s works and he was a wondrous wood worker. Really, he had the skills of a cabinet maker and I appreciate these skills, having a few examples of my grandfather’s cabinet making. I have a lot more of Bill’s skills.

I first met him when I lived at Houghton Bay and he moved into a rental at the bottom of the street in the latter half of the seventies. Neighbour Jacob introduced us. I hit it off with Willie, as I called him. I had heard both names used and asked him which he preferred. He shrugged, said either. Okay, I said, I’ll call you Willie after a favourite film, Tell Them Willie Boy Is Here. It was written by a blacklisted director Abraham Polonsky, his first in 21 years. It was about a manhunt for an ‘Indian’ who had killed in self-defence. I thought it suited this fierce man who told me he was on the run after absconding from the US Navy because he would not fight the Vietnamese. It was not that he was reluctant to fight, as I learned though never to my cost, but it had to be a just cause.

Willie was a righteous man. He had an MA in history from Sydney University but chose to work with his hands. I enjoyed his company because he liked to talk seriously about books, even mine, whilst we downed a few drams of best malt. One of his favourites was Foucault’s Pendulum by Umberto Eco. I had managed The Name of the Rose but this was too deep for me. Not for Willie.

All the time he was a jobbing carpenter, wearing a fresh pair of jeans each day, washing seven at the end of the week. A meticulous fellow.

He did any job I asked him, repair of a beloved bellows, building a wine rack , the ‘Kumara hut’ study in my garden, with daughter Kate offering perspective. I wanted five sides. He took it to new heights with a 10-metre long ridgepole he carved a koru into at its apex. It was constructed from my favourite wood, macrocarpa, which he happened to own a share of a plantation of in Nelson, where he had come from after a failed marriage. He talked about his children all the time.

There was enough macrocarpa left over. I asked if I could have a sauna underneath. No worries. Cheapest sauna ever, the stove was the only big-ticket item.

I wanted a bookcase to run through the spine of my house. No trouble. He built it so I could dismantle if need be. I have since shifted five times, each time dismantling and reassembling many iterations of the original. He built to last.

When I had to shed my beloved kauri table, he took it. Every day he polished it with his bare hands until it developed a deep patina.

I wanted a Japanese-style house with a camomile lawn in an interior courtyard. No prob. He designed it way cheaper than the architect’s quote. He built it, and trained me as a builder’s labourer nail-gunning the macrocarpa pickets, learning to use a chalk line to lay the 3000 Spanish tiles and clad the walls in 6000 cedar shingles. I can still smell the glorious cedar as I fitted the shingles.

How about a porthole window? No worries. A plumbed outdoor bath suspended 30 metres above the road? Easy peasy.

He had me digging foundations, helping on the framing, working with him on the roof, 40 or so metres above the road. I was terrified. He said I would get used to it in a few weeks. He was right. And most important, he taught me to de-nail and clean up at end of the day’s work.

It was a big project and we just made it in terms of money and other tensions. Epic views but too windy for me and Kate. I sold up and moved on.

Many years later, a few months ago, he turned up unannounced, wandered around my house, checked out my books in his bookcases, observed I was not as fat as I used to be, said he hoped we could still be friends and left. Farewell, Willie, master craftsman. Slainthe! Slainthe va! 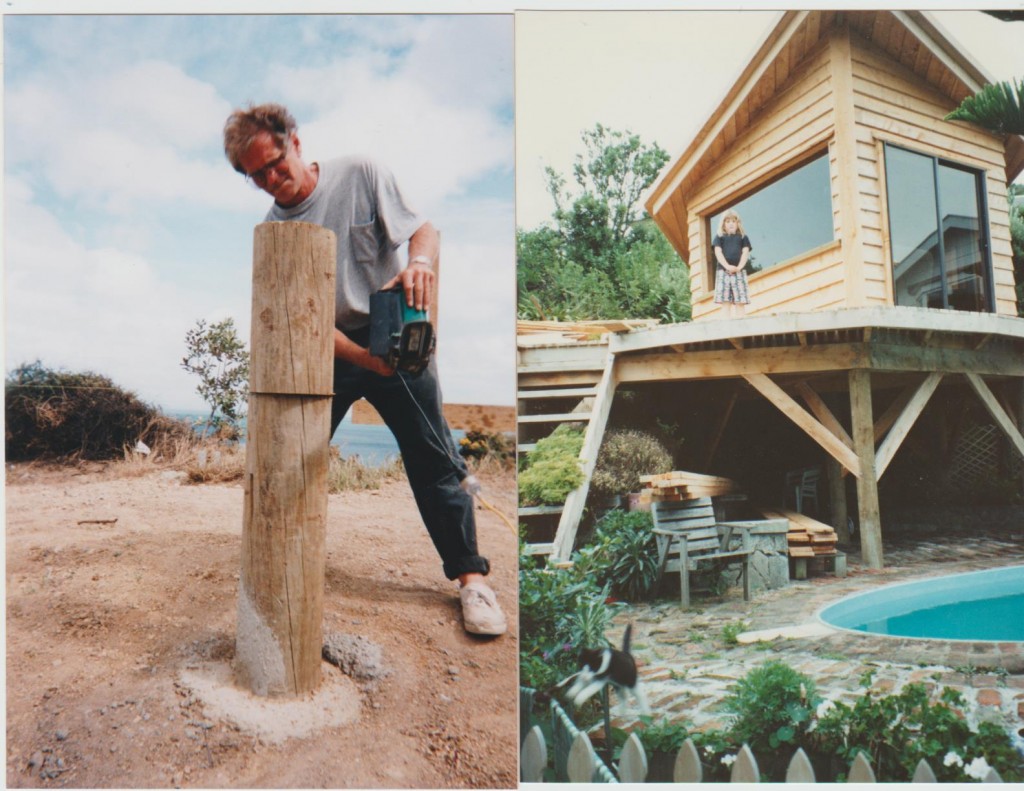