‘I’d much rather go by train’ was one of Lady Chatterley’s least controversial remarks. Fellow Paekakariki writer Michael O’Leary and myself share this view, and were reminded many others do too on our recent return trip on The Overlander to our hometown Auckland. People waved at us passing by on the train, we waved at them. When is the last time you saw anybody waving at cars or boats or planes? The point being that Michael and I have collaborated on a revisiting of my 1985 rail journey around New Zealand in now obsolete guards’ vans. The G’Day Country Redux is an extensively revised edition, with the additions of our Overlander journey compared to 1985’s Silver Fern, over 100 images of trains then and now, and Michael’s original and witty railway poems.

We both argue for bringing back the country’s first main trunk line, The Southerner from Christchurch to Invercargill, and the railcars from Wellington to Gisborne and New Plymouth. The Southerner was our best passenger train and we need it to complete the friendliest and most relaxed way to see the country. There’s no comparison between the scenic splendour from the train and the car canyon into Dunedin. A revived passenger train complex only requires demothballing railcars, a cheap fix for the benefit of showing a generation of kids the best way to see the country they never notice from car or plane. The cost is about that of shaving another corner off the state highway, the benefit for locals and tourists relief from road stress and a relaxed and inexpensive way to see our great country.

‘You don’t have to be a train buff to enjoy this book.’ – Judy Cleine, Southland Times 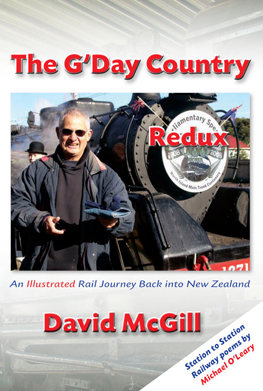