In March 1868 a Catholic priest leads hundreds of Irish miners and three mock coffins through the streets of Hokitika, to celebrate as martyrs three Fenians hanged in Manchester. The arrest of the priest on a charge of sedition leads to Irish riots on the goldfields and conflict with British loyalists so bad the new Governor of New Zealand, who has received death threats from Fenian agitators, sends in the troops. This novel recreates the actual events of the fighting and the country’s only 19th century trial for sedition, and the secret work of agents provocateurs whipping up a ‘War of Races’ that will sweep back through the colonies to liberate Ireland from Britain. Set in the colourful period when Hokitika was the gold-rush capital of the world, this tale follows the reporting fortunes of a young journalist pitched into midst of men craving gold, champagne, dancing girls and the world’s first experiment in political equality for all races and nationalities. 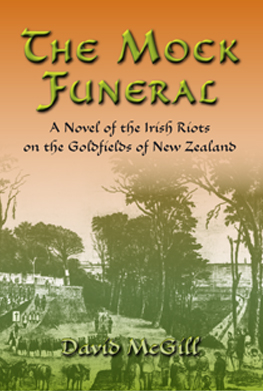