The Plot To Kill Peter Fraser

Former detective Dan Delaney returns from sitting out the war in Italian and German prison camps. All he wants is a peaceful life with his refugee bride, but his old boss Inspector Biggart needs his help, his staff disbanded by Fraser and Nazi internees released from Somes Island. The hunt for would-be Nazi assassins takes them into Wellington’s black market underworld, a defensive Italian fishing village and an upmarket yachting haven. Prodded by the Commissioner of Police, Dan reluctantly involves his wife in a dodgy cabaret scene, as Nazis are killed and British and Soviet spies Dan has previously clashed with arrive to assist a suspected American undercover operation. Dan and his wife risk their lives as they race to identify the threat before a prime minister refusing security is struck down.

Both a whodunnit and a who’lldoit, this Kiwi intrigue features Detective Delaney a decade after The Death Ray Debacle, which Tim Gruar described in the Booksellers NZ Blog as a ‘fast-paced action spy story’.

‘It’s a rollicking read. It’s got all the great elements of a  spy novel, including a nice little twist at the end.’ Grant Robertson, Wellington Central MP, speaking at the launch, 30/3/17

‘This is a “hard to put down” book . The reader REALLY wants to know what happens next.’ Professor Roger Boshier, 3/4/17

‘The plot unfolds with twists, turns and lots of action … What I really loved about this book is the way it presents New Zealand plonk in the middle of international political history.’ Alyson Baker, Crime Watch 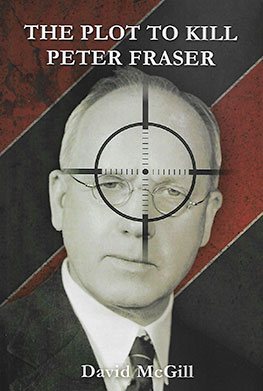