On a Bodgie Bike

Eighth Commandment: Thou Shalt Not Steal

Matt Delaney and his mate Ante Vukovich steal a precious religious vessel and in the course of the burglary a man is killed, setting in motion personal and political mayhem. It is 1955 and they just want to be milk-bar cowboys against the squares and their suffocating rules banning unmarried sex and excessive speed and anything worth doing. Matt’s uncle Dan Delaney is out of the police and in a dead-end job when Matt’s alcoholic mother begs Dan to sort out a charge of murder against her son. They live in what is called West Auckland’s Dallie Valley, Ante is Dalmatian and his Croatian relation has arrived to reclaim the religious icon that could unite his homeland challenge to Yugoslav communist rule. Dan Delaney’s only ally against corrupt and brutal police is an ex-Commissioner of Police assisting the National Government clean up the police and establish a separate security intelligence service.

This is the third outing for former detective and spy catcher Dan Delaney.

In The Death Ray Debacle Delaney thwarts a 1935 plot to kidnap a New Zealand scientist who invented what we now call radar and lasers. ‘A fast-paced action spy story … builds to a great climactic finish. If this is ever made into a film the director will need not look any further for an accurate chronicle.’ Tim Gruar, Booksellers NZ

In The Plot to Kill Peter Fraser Delaney thwarts a 1945 assassination plot to kill the prime minister. ‘The plot unfolds with twists, turns and lots of action … What I really loved about this book is the way it presents New Zealand plonk in the middle of international political history.’ Alyson Baker, Crime Watch

‘McGill’s trilogy of local thrillers are all pacy novels that are informed by honest and astute social histories. He imagines political incidents and crafts satisfying narrative action around them that opens up an alternative history that just might have been!’ Murray Gray, Founding Director, Going West Books & Writers’ Festival, present at Going West Festival launches of The Monstrance 2003 at Helensville and On a Bodgie Bike 2018 Glen Eden. 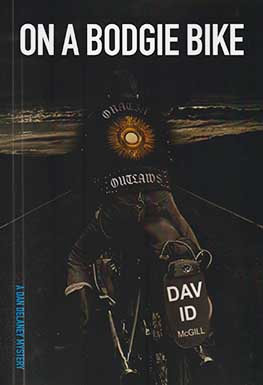